George Quirin is a guitarist, multi-instrumentalist, composer, producer, collaborator, performer, teacher who is based in Santa Barbara, California. George loves to travel and is available to perform or collaborate with you anywhere in the world. George loves music and is excited to hear from you about your musical project. 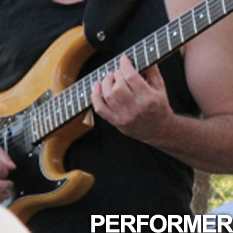 Tradewinds Pacifica: A musical journey across the Pacific and around the World with Santa Barbara guitarist George Quirin and Tokyo-based shakuhachi master Bruce Huebner. The shakuhachi flute, rooted in Zen Buddhism and made of bamboo, meets the passion of the Spanish guitar. In ancient times the shakuhachi was carried from the Middle East to Japan on the fabled Silk Road. Meanwhile, the guitar springs from flamenco and Renaissance traditions and has antecedents in the Middle Eastern Oud.
Visit the Facebook page.

The Idiomatiques are a unique listening experience. The Band draws mainly from Gypsy Jazz, but the accomplished musicians of many genres bring their own flair. Forming about five years ago, they became the first Gypsy Jazz band in history to place in Billboard’s contemporary jazz top 30 chart, spending eleven weeks there. The Idiomatiques combine virtuosic instrumental abilities with some vocals and comedy, using a mixture of Gypsy Jazz, Latin, Mainstream Jazz and even some R&B. Members of the band have worked with Michael Jackson, BoyzllMen, Michael McDonald, Kenny Loggins, Larry Carlton, Luis Munoz and Gilles Apap among a host of other world renowned recording artists.
Visit The Idiomatiques webpage.

Watch the movie on The Internet Movie DataBase (imdb).

“Thank you very much! Our guests were raving about how beautiful the music was.”

“Enjoyed your music and it was perfect for our Grand Opening.”

“George is a creative and talented guitarist and composer! He has a great attitude and is fun to work with.”

“Sublime!  A true “enchanted” evening for our gathering of 8 friends for an intimate birthday dinner and celebration in our home. Plan ahead to invite this amazing performer to your next event.”

“I have been using George to provide live music at my weddings for several years. He is always on time and professional. Never a complaint, just lots of KUDO’s!”

“George has great talent and is fabulous entertainment for any festivity. Time and time again guests rave about his music and musical genius. As a planner, it is also great to do business with George. He is responsive, attentive, detailed and gives 110% consistently.”

“We just wanted to drop you a line saying thank you for your beautiful classical spanish guitar playing last Sunday at the Four Seasons – and especially for taking the extra time to learn two new songs! It certainly added to the romance of the evening and made our one-year anniversary most memorable. It was

“Thank you. Actually the pleasure was ours. Your music added wonderful  dimension, energy and warmth to our event. I am sure every time I hear Santana Pa’Ti  I will return to the vision of Lauren walking with her Dad.”

“George is an amazing talent. His skills and ability to bring the best out of you are unmatched. You would be lucky to have the opportunity to work with this fine person.”

‪Billy Mandarino‬ Realtor For Village Properties"George is an amazing talent. His skills and ability to bring the best out of you are unmatched. You would be luck to have the opportunity to work with this fine person." March 10, 2015

“George Quirin is one to hold onto. He’s a great communicator and trustworthy on top of being a master of his chosen crafts. I would recommend him for all music and film production or anything he would set his mind to ultimately.”

“George’s commitment to music is absolute.”

“I saw George play while visiting Santa Barbara and was blown away by his beautiful playing on the Flamenco and Classical guitar!! He is certainly one of the most accomplished guitarists I’ve seen in a long time and his repertoire was gorgeous !!”

“Thank you so very much George! It was an honour and a pleasure having you play for our special day! All the best!”

“We just got back and had a wonderful time. I can’t tell you enough how wonderful your music was and the precessional song was beautiful! We will absolutely be recommending you for anyone that needs a guitarist. Thank you for helping make our day so special.”

“I just wanted to tell you how stoked Michael was today after his lesson. He absolutely loved jamming and talking with you! Thank you!”

“Thank YOU! It was amazing – in every way! I wanted to personally thank u for creating such a perfect mood every step of the way! It was a pleasure to have u with us – what a glorious day! Please feel free to use us as a reference if ever needed.”

“George is a highly gifted and talented muscian. He has been a guitar instructor for me and was the musical director for my wedding. In addition, we have hired him as a performer for a number of events for non-profit agencies I work with. You will be very happy with his results!”

‪Rick Knowles‬ Member of the Board at Anacapa School March 10, 2015

“Thanks for all your help.  Feel free to use us as a reference – everyone loved your music.”

“George Quirin is an amazing guitarist and is our number one choice whenever we need a guitarist for an event. His repertoire is expansive, his musical abilities are exceptional and he is very professional, courteous and always on time. He is at the top of our preferred vendor list for guitarists.”

“George, Brenda and I would like to thank you for being an integral part of our wedding ceremony. We thank you for the inclusion of singing Night & Day as we were able to have this as our 1st Dance. Otherwise, I would have had to have sung the song and I was really not

“That was the most beautiful evening ever. and all the more wonderful from your music. I couldn’t have asked for better. The group was very pleased and continued on the next day at Ellings park. My son has the best start for his marriage and support from so many people.”

“George is a wonderful and very creative composer. He gets in tune with the project and showed endless passion, flexibility and patience. He is fun and easy to work with. Highly recommended for any instrumental music needs for a project.”